So, I recently directed Oliver Twist for Kids and am about to direct A Christmas Carol for Kids. In doing so, I have come across a great costume that is both inexpensive and very effective as a fun kids cape to wear. As you may or may not know, there is a creepy villain, that is constantly referred to as the caped guy, in Oliver Twist named Monks. (Think of the villain from Meet The Robinsons).  As well, there is the fourth ghost in A Christmas Carol that is the Grim Reaper. Both these characters can easily wear the same, simple, costume.  Add a mustache for Monks and a staff for the Grim Reaper and bamm! You are good to go! (This is also a great cape for use with Macbeth for Kids for the “Murderer” character!)

I spent quite some time looking through all the different capes/cloaks/hooded sheets on Amazon until I found the right size, look, length, and price that works!

It’s a simple black hooded cloak with a crushed velvet finish to make it look really cool. The best part is that the kids LOVE wearing it (and for less than $20!) Half the time they’re acting like Darth Vader when wearing it off stage, but hey, that’s the fun of being an actor, right? Using the imagination!

Here is the link to Amazon for the Cape. Have a great performance and see you on the stage! 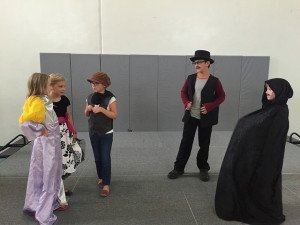