Did Doctor Who write Shakespeare? 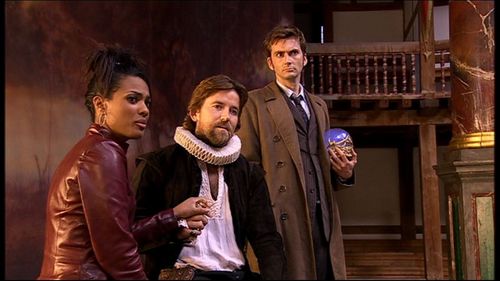 I know that question is a bit ridiculous. This is more about an episode of Doctor Who I watched where Shakespeare was the focal point of their adventure. It was quite cleverly written and I found it very interesting. The premise of the story was around Shakespeare’s missing play, Loves Labors Won, and the story behind it.

Now, there is no truth to know if this play ever existed or not, just many theories, and why not throw some aliens with the Doctor into the mix as well!

What I liked about the writing was the timing of the lines in comparison to the timeline of Shakespeare’s actual plays. This episode was based in roughly 1599.  There was a reference to “to be or not to be” or “all the world’s a stage” or several other lines. Many times Shakespeare would say, “Hey, that’s good. I’m going to use that” Even once, Doctor Who said, “Into the breach!” in which Shakespeare retorted, “Oh, I like that too… wait, I did write that…”  And of course, 3 witches are our primary antagonists… so, the seeds of Macbeth were started there too.

It’s season 3 episode 2 – The Shakespeare Code, One of David Tennant’s seasons.  If you have kids into Doctor Who, this might just get them into Shakespeare as well! They even open the show with a little homage to Romeo & Juliet… of course, it turns quite dark after that, But still, Shakespeare references are littered throughout this fun episode of Doctor Who!